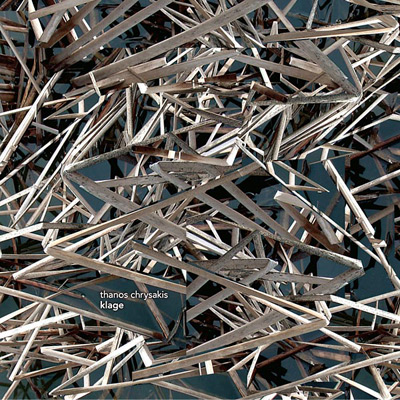 Klage, the first release of AURAL TERRAINS, contains compositions based on a relatively wide range of timbral, rhythmic and melodic material, aiming to achieve a confluence between its structuring forces; acoustic instruments and electronic sounds. It is preferable to be listened to not as separate tracks but as an aural manifold of different distances/proximities, and contours; at times creating a sense of hovering, suspending time, while at others a more directional trajectory.

Greek born, London based composer Thanos Chrysakis expresses admiration for Olivier Messiaen, and there are echoes of the French composer’s harmonic procedures throughout Klage, not only in 'Immanent Distance', an improvisation by Chrysakis on vibraphone and Dario Bernal Villegas on piano, and the interlocking all-interval tetrachords of 'Isabelle'. But unlike Messiaen, Chrysakis creates music with no discernible foreground or background, but made up of interpenetrating layers creating a network of cross-connections; the result has more in common with post-Lachenmann New Complexity than with the spacey, SuperCollider-esque laptoppery it superficially resembles.
Bowed and struck percussion provide much of the source material for Chrysakis’s electronic transformations, from the singing bowls of 'What Lasts Is What You Start With' and the tubular bells of 'Downstream Prism' to the mildly disturbing shuffles, thuds, and gasps on the closing 'Childhood’s Vertigo', also sourced from an improvisation with Villegas. The appearance of a memorable spoken quotation from Lar’s Von Trier’s Europa towards the end of the album’s most substantial and accomplished track, 'Nekyomanteion', comes as something of a surprise, and yet it’s entirely in keeping with the poetic mystery of the music’s ghostly, subaquatic assemblage of crackles, moans and delicate chimes. The album title puns on German and Greek, meaning both profound grief and the clang of clashing swords in battle, and there’s a sense of both throughout this arresting and powerful work.

Chrysakis lives in London where he composes his music, plays the vibraphone and builds installations. On 'Klage' the vibraphone plays an all important role, but it's also half the story. Chrysakis feeds the signal of the vibraphone through various pieces of software, and crafts both signals together in a highly interesting form of microsound and ambient glitch. The warm sounds of the vibraphone, which the instrument has by nature, is kept alive in this work where the computer software produces likewise warm sounds. Beautiful colliding material, sometimes played in a free, almost improvised manner, and at other times in a more straight forward manner. Of course the fusion of a real instrument with software is something that has been explored a lot, even in the context of microsound, and on many occasion as nice as Chrysakis does here. As such Chrysakis fits a certain scene, but he does a great job here. Fluid music, flowing merely nice the stream. Soft, warm and as such perfect for a nice afternoon with lots of sunshine.

Here's the debut release for a very interesting label from London. Thanos Chrysakis' Klage is a sumptuous collection of experimental electronic music with a minimal, abstract, yet engaging sound. It spans multiple genres, from melodic pieces using drones and textures through to a more complex, seemingly improvised style of sound work that uses elements of musique concrete, electroacoustic and field recordings. Altogether it creates a very listenable and intriguing series of tracks that keeps a firm grip on itself, never becoming deliberately awkward and always allowing the listener space to enjoy the sounds on offer. I'm definitely looking forward to hearing more from this very promising label. Excellent stuff.

Thanos Chrysakis is a musician and electroacoustic composer based in London. He has created a number of installations and has several releases on various net labels. With Klage, he has launched his own CD label with a collection of nine wandering atmospherics, sonic environments of uncertain origins, some of which retain performative aspects that reveal his training as a percussionist, and some of which spring entirely from his imagination.

Only the opening track, Immanent Distance, gets singled out as an acoustic work, credited on the sleeve to an improvisation between the composer on vibraphone and Dario Bernal Villegas on piano. From the sounds on the piece, the piano was probably prepared and played inside the piano as well as on the keys. Prepared with this knowledge, one can imagine that the piece Summer Fog has a similar derivation, but has additional treatments and overlays. What Lasts Is What You Start With sounds like bowed metallic percussion, a brief shimmering that leads directly into the shortest track on the album, Nearly Alongside, where bells are shaken and struck in a high, loud ringing for barely over a minute, cleansing the ears at the album's midpoint.

On the album's longer tracks, such as Downstream Prism, Chrysakis uses subdued voice to thicken the texture, creating a web of mysterious sounds heard through a fog. Words appear just on the verge of articulation. On Childhood's Vertigo, post-processing becomes more apparent, sounding almost like the Colorado group Biota, with rhythms made from echoes, perhaps brushed drumkits, tubular bells and cymbals. The longest piece on the album, over thirteen minutes, is a work inspired by the Oracle of the Dead at the the three rivers entering Hades, according to Greek mythology. Nekyomanteion sounds like the river of its inspiration, with static chittering like the watery sounds running over rocks, and other sounds placed in its flow. Chrysakis intones a short quotation from Lars von Trier's 1991 film Europa, describing the sleeper at the bottom of the river. The image aptly characterizes the piece, capturing the organic flow of the river and the slow, dreamlike activity of the sleeper.

Although Chrysakis has released the album as a collection of individual tracks, he views it as 'an aural manifold of different distances/proximities and contours,' all presumably translating to a deep connection among them. If some of the short pieces seem like fragments, the longer works successfully compensate with immersive and unique sound worlds.