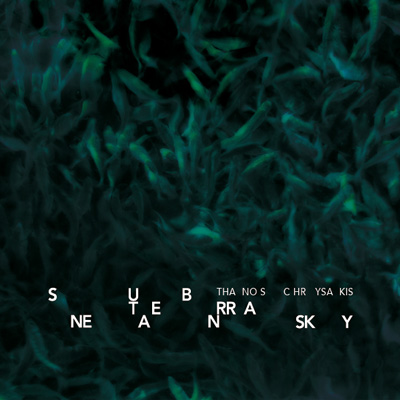 Once upon a time people used to play Steely Dan albums to test a new set of home speakers [I still do - DW]. Now you can replace Aja with Subterranean Sky, a record conceived from "field recordings, synthesized and acoustic instrumental sounds". Perhaps Thanos Chrysakis is afraid of calling the fruit of his research "computer music" to avoid being filed away alongside the purveyors of cheap fizzle-and-glitch – if so, given the quantity of engrossing noises coming from my (old) stereo, his reluctance appears wholly justified. The right adjective is metaphysical; there's no evident reference to styles or past masters, apart from a pinch of Luc Ferrari when adult voices emerge from the kind of fluid hallucination of which the album is packed. The throb of subsonic matter, fluorescent glow of certain ejections and a correct application of the laws of randomness impart a feel of earnestness to the whole work. In addition to his machines, Chrysakis also employs metal percussion, clarinet, guitar and viola in selected episodes, but only the first of these is recognizable, while the others blend in so well with the ever shifting textures that discerning their influence is well nigh impossible. I trust the (de)composer's will to tell me if those racing cars and crickets were real, or a figment of my imagination.

Nobody I know likes to have their music put in a box, but we all like to know in advance of contemplating a new release that we’re likely to listen to. To my ears, this release by Thanos Chrysakis takes us into the territory of electroacoustic music, more specifically acousmatic music, where the concerns tend to converge on compositional craftsmanship and on the formal considerations of working with diverse sonic materials. In this series of works Chrysakis takes an encompassing view of the sonic universe, choosing to work with instrumental, electronic and environmental sound.

This album consists of five original compositions, described in the sleeve notes ‘as five movements based on field recordings, synthesized and acoustic instrumental sounds composed between November 2009 – August 2010′.

Overall there’s a freshness and crispness to the work, a sense of vitality engendered by careful attention to shape, contrast, density of textures and their spectral separation.

I think that the best way to review work like this would be to go through the movements one by one.

1 [10:05] (with metal percussion instruments played by Chrysakis himself)

This piece is characterised by a series of what can best be described as ‘classic’ acousmatic textures, rolling textures, stretched up and down, filtered and offset with one another to create complex contrapuntal polyphony. In fact these are typical characteristics across all five movements.

The most noticeable gestural material comes in the form of metal percussion, predominantly cymbals by the sound of them, processed lightly in various ways, but never so much as to obscure the particular excitement that these metallophones have to offer. They contrast well with, and importantly, prevail against the various contrapuntal textures, offering a clear sense of orchestration.

What I enjoyed most about this piece was the sense of physical activity, a personal engagement with the sounds, a trait I wrote about in relation to one of Chrysakis’ earlier albums, Enantio Dromia. I also appreciated the sense of form – highlighted by a clearly audible climactic point or zone in the shape of a tonal drone – as well as the dexterity in handling a range of compositional devices, for example high/low contrasts and iteration. I was less sure about the vocal fragments which always seem to me to imply a programmatic agenda of some sort and possibly too close a relationship with the material to hand. Nonetheless the piece draws to a close with a fine ritardando and a gritty granular coda.

With its dynamism and energy, this movement would work very well as a concert piece over a multi speaker array (I can imagine the Birmingham or Quebecois composers/diffusers having fun with it). It should have no problem in finding opportunities for performance.

Track two is characterised immediately by its bold and spacious opening statement after which the full frequency range establishes itself. This is a busy and complex piece. Wide panning movements, in fact an excellent exploration of panorama throughout (more ‘classic’ electroacoustic moves), help to draw in the listener. The rolling textures throughout the piece kept my interest alive, at the same time imparting a sense of pace and variety. The closing statement, a contrast of shuffled noise and distortion, is particularly effective.

The clarinet is obvious from first gesture, which helps ‘set the scene’. More rolling textures, edged with noise, fade in and out to reveal environmental sound sources and a range of dynamic gestures.

In one passage the clarinet is beautifully embedded in a naturalistic soundscape, sounding like a bird at times, the whole effect alluding to techniques of film music. The guitar is well masked, less easy to identify, though this does mean that the more obvious clichés are avoided. Occasionally it becomes recognisable in processed form and in the unique gestural identity of the instrument.

Overall this piece is well put together and thoroughly convincing. I especially enjoyed the sense of tension – you’re never sure what’s coming up next.

The prevailing spectrum which opens the piece is of an abstraction to make it unindentifiable. Percussion gestures emerge, accompanied by a range of electronic sounds, again of uncertain origin (field recordings?). Then we are treated to a series of similarly shaped intrusions with an edge of noise. At times the music gave the impression of a contemporary orchestra at a point of tension – the metal timbres in this particular environment brought to mind Macmillan or Birtwistle. This then gives way to a more mellow contrasting section, very filmic – then more physical instrumental playing to balance the abstract textures.

Here we have vocal samples, then rolling textures, building to complex polyphony (stylistically consistent with the previous pieces), well separated spectrally. I thought that the high/low contrasts were very well handled, as was the problem of introducing certain sounds that are found throughout this idiom – shuffled glassy sounds and watery sounds, all of which have a bearing on managing the overall context.

The piece then  morphs gradually into a soundscape where I think I might at last be able to hear a live instrument. Otherwise, and of course there’s nothing wrong with this, the viola is unrecognisable.

When you choose to compose music in this idiom, there are several dangers. One is that you end up with a form of ‘pure’ music, a music which has all the correct chemical ingredients, balanced appropriately, resulting in an uninteresting academic product. Pure might then be read as empty of passion or warmth (human attributes in other words) or even sterile, lacking the ability to create/produce or procreate/reproduce, to talk in wide field metaphorical terms.

To use a sporting analogy, some forms of electroacoustic music resemble the efforts of obsessive gymnasium puritans, those who hone the body and tone the muscles without actually applying the beautiful body to any sport or similar activity. In this case we’re dealing with a form of narcissism. Furthermore in entering the field I think you are aligning yourself with a very strong canon and at the same time laying yourself open to a powerful critical discourse. Taking on a rigorous idiom might then be seen as a courageous step.

I’ll say straight away that this series of works stands up very well indeed. Chrysakis’ sense of invention ensures that the pieces never break down into sterile matter, but above all the craftsmanship and sense of physical vitality throughout make the pieces breathe and live, encouraging a range of positive responses in the listener.