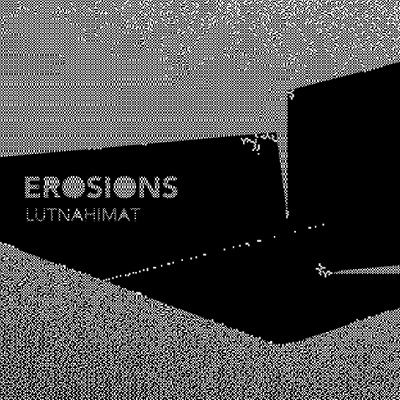 Lutnahimat is a London-based project, formed in 2002 by composer/sound sculptor Ian S. After studying music technology in London, Ian has experimented with numerous acoustic instruments including strings, woodwind, brass free-reed and prepared instruments. Not wholly satisfied with the sounds available, he has also built several electronic instruments from scratch and created a variety of recording techniques to go with them. Lutnahimat has been working on soundtracks for short films, sound installations and exhibitions as well as releasing several limited editions on labels such as Entra'cte and EE Tapes. After concentrating at length on acoustic recordings Lutnahimat is currently working on minimal electronic music using purpose-built devices and self-written signal processing programs. For Erosions Lutnahimat used some of these instruments as well sound samples recorded in India and Cameroon.

In the late 90s, it was generally accepted that after the emotional vacuum of the preceding decade, audiences were literally „craving for real feelings“. Consequently, the haughty airs of an aloof caste of bigger-than-life pop stars were replaced by a more upfront and direct way of interacting with listeners. Since then, the trend towards eliminating the borders between the personal and the public has continually accelerated, culminating, in an unfortunate turn of events, in the fabricated dream factories of American Idol and Superstars. In times like these, the work of Lutnahimat must seem like an anachronism: It doesn't offer any confessions. It eschews escapism. It documents neither private crises nor triumphs. It seems equally detached from scenes as well as the marketing conventions and release cycles of the music business - Erosions is the first full-length in a full four years, while previous EP, Kleine Mietzekatze, on entr'acte, came in the label's typical sealed plastic bag without any kind of accompanying imagery or photos. There may be similarly elusive artists out there, but they are certainly few and far between, with the true identity of the project's sound sculptor hidden in a string of musical babushkas: Behind Lutnahimat hides another nome de plume, Ian S, and a poignantly sparse biography mentioning studies in music technology. And yet, despite the seemingly impenetrable façade of its hallucinatory walls of sound, Erosions actually constitutes one of the more personal efforts you'll find in sound art today.

After all, although the album again sheds no light whatsoever on the composer's personal life and comes packaged in a pitchblack digipack with an artwork resembling a stylised map of a lifeless island in an ocean of grainy textures, every single musical aspect contained on it carries its creator's fingerprints. In a bid of avoiding the generic timbres of standardised industrial equipment, it makes use of custom-made electronics, self-built instruments, project-specific tools and personally programed software feedback systems. Significantly, field recordings captured on trips to India and Cameroon are making an appearance, although one should obviously neither expect sweet sitar reveries nor percussive interludes. More importantly, it displays a strikingly original approach to composition and sound. If one defines noise as an area in music, in which multiple events are either so tightly clustered or so diffuse as to result in systems of both utmost complexity and aural brutality, then Erosions not merely deals with the question of how one of these state can tilt into the other, but how one can establish a dialogue at eye level between the two: On closer „Senescence“, a bassline comprising of the hypnotic alternation of two deep organ points takes turns with violent outbursts of acidically frizzling, cacophonous din. At first, the latter seem to be disrupting the peace, but they gradually grow from second-short explosions to more expansive stretches, resulting in an equilibrium between simplicity and sensorily unprocessable fuzz. Astoundingly, it takes on an almost meditative quality on this occasion.

Drawing from sounds of almost primordial intensity and a high degree of abstraction, Erosions demonstratively steers clear of distracting extra-musical concepts. Its most tangible assets are the title to opening piece „Snow in Hadal Zone“, which refers to a surreal aquatic phenomenon manifesting itself at the deepest and most extreme points of the oceans, as well as, on „Absence of Alternative Conditions“, the recording of a voice recounting seemingly unrelated words. Rather, this is processual music, operating with a highly reduced set of elements, ceaselessly controlling and adjusting their values and creating chains of continually changing constellations. On twenty-minute long „Snow in Hadal Zone“, which oscillates around the steady backdrop of a glistening band of sawtooths, Lutnahimat supervises the advent, development and ebbing of various, outwardly primitive themes, starting with an upward-bound tritone in the treble and a downward-bouncing minor third in the bass and then gradually working towards a stately pulsating, bronze-coloured drone. Almost exactly at the halfway-mark, the music starts to retract again – or should one say, to erode – with the process repeated exactly in reverse. In its final seconds, it has returned its starting position, fading back into the uneasy silence it initially emerged from.

The psychedelic impact of this music can not be denied, especially when played at the suitable ear-spitting volume. Still, it has been constructed in a perfectly logical fashion, which pronouncedly softens its otherwise alien and otherworldly feel: The basic structure and architecture, as well as the composer's „intentions“ - a most inadequate term perhaps, with regards to the perfectly self-sufficient nature of the work - are, as it were, revealing themselves to the audience in the process of listening. The composer may be keeping his whereabouts and private details hidden from sight, but he is certainly not keeping any secrets from his listeners, who are able to follow the gradual unfolding of a piece from the very beginning to the end. The absence of typical „emotional“ factors from these pieces, therefore, is not a programmatic crutch and even less a mere academic shtick. Rather, it is a prerequisite for making the processes, thoughts and human creativity behind the work as clear and tangible as possible. It doesn't take away anything from their all but obsessive intensity and density – just as with the artwork, which requires using a pair of scissors to cut through the sealing cover sticker, one first needs to make some careful incisions. Once you're inside, however, there is plenty of beauty to discover here, be it in the glacial tectonics of shifting elements, the simultaneity of noise and sound as well as almost chambermusical fields of intertwined string palpitations.

Only at the very end, the curtain suddenly slips open for no more than a few seconds, revealing a tender piano melody played on what seems to be a toy piano. Then it closes again, reinstating the intense sheets of sound. Moments like these may not satisfy the general public's hunger for privacy. But within this at times fearful territory, they do sound like the most intimate confession imaginable.

Another record which, tonight at least, is managing to exert its mesmerising force through ebb and flow and minimal radiating throbbage is Erosions (AURAL TERRAINS TRRN0413) by Lutnahimat. This is a one-man project by Ian S. of London who, with the minimal music and minimal information available about his life, preoccupations and intentions, manages to project an image of staring-eyed hermitry and dedicated study to his craft, which I like. Quickly growing bored with conventional instrumentation and compositional methods, he has devised his own electronic music instruments whose inner workings are known only to him. Though he’s not in the same league as David Tudor with his vibrating boxes (and who is?), Lutnahimat’s 20-minute ‘Snow in Hadal Zone’ here is one of the most affectingly ‘blank’ examples of this genre of music that has crossed our desk for some time. Even recent submissions from Raster-Noton seems positively raucous in comparison with this laid-back, evilly-humming introverted rattlesnake of electric drone. Field recordings from India and Africa feature elsewhere on the record, but so far for me nothing licks the intensity of ‘Snow’, conveying the effects of bad drugs and being stranded by bad weather inside a dingy bedsit with a gas fire for company. A nice mysterious item; I must check and see if I was ever sent any of his previous releases on Entr’Acte.