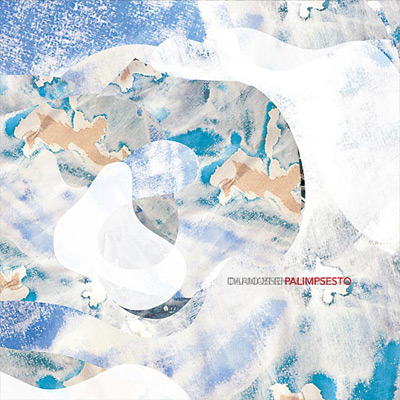 Palimpsesto is the result of real-time compositions (in other words improvisations); a palimpsest of interwoven sonorities and aural structurings, based on two classes of sounds, electronic, and percussive (pitched/unpitched).

Is music but a palimpsest in the air? A moment to moment of writing and erasing different temporal layers? A coexistence of what we have accumulated, and how we relate, and respond to the instruments and to each other, in the course of a musical encounter? If I was to describe this CD with two words, I would prefer to call it a coloured palimpsest.

Darío Bernal-Villegas is a composer, improviser and drummer from Mexico City. Improvisation has been an essential part in his work as composer and performer. Many of his pieces deal with improvisation, as his aim is to create an intense, creative interaction between the performer and the score; in other words, creating the conditions for a more intense dialogue between the performer and the composer.As an improviser he has worked with musicians like Raúl Tudón, (Tambuco Percussion Group, México), Wade Matthews (USA, Spain) Thanos Chrysakis (Greece), Sebastian Lexer (Germany) Oli Mayne (UK), David Plans Casal (Spain) among others. Nowadays, he is working with the Mexican improvising collective Generación Espontánea and with the composer Tom Corona in his group “The Coming Burguers”.

Oli Mayne is an English experimental vibraphone and analogue synthesizer player, with an emphasis on intense, physical performances.  Currently based in Budapest, he first encountered improvisation in a duo with a Brazilian pianist whilst living in Nottingham, England, but got more seriously involved in the experimental side of things after moving to London, attending the weekly improvisation workshops run by Eddie Prevost of legendary improvisation group AMM.  He has appeared at various London improvisation events and venues, including the Evan Parker/ Eddie Prevost/ Martin Davidson run 'Freedom of the city' festival (twice), and nights put on by Adam Bohman/ Bohman Brothers and the Society for Promotion of New Music; he has also performed in Nottingham, Brighton and Birmingham.  Since arriving in Budapest, he has performed in a trio featuring Zsolt Sőrés and Zsolt Varga; forthcoming plans include a dance collaboration, and further performances with a new quartet featuring Sőrés, Adam Bohman (England), and Jean-Michel Van Schouwburg (Belgium).  He also plays keyboards and percussion; other musical activities include the British space rock band Litmus, the newly formed Budapest-based trance group Rasasound, and classically-orientated percussion quartet Brake Drum Assembly. 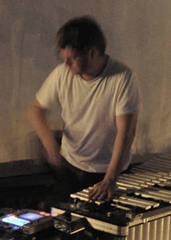 Thanos Chrysakis has attracted some attention as an installation artist and electroacoustic composer with a particular interest in music's spatial dimension. He also plays vibraphone, and the glistening colouristic sonorities of that instrument pervade Palimpsesto. These nine pieces, recorded at Goldsmiths College in London, also feauture Mexican percussionist Dario Bernal Villegas and Oli Mayne, who takes on the vibraphonist's role on four tracks while Chrysakis plays prepared piano.

Chrysakis has in effect transferred an electroacoustic musician's refined concern for timbre into this instrumental context. The nature of the vibraphone, bowed as well as struck, allows him to foreground relationships of attack and decay, clang or chime and fading pulsation. Its metallic character and variable tremolo contrast especially with the more introverted wooden tones of the marimba used by Bernal Villegas. Prepared piano occupies a kind of sonic middle ground between these two percussive voices, and the drummer's occasional use of a standard kit adds other sound qualities and rhythmic trajectories.

Some pieces, such as 'Opiophobia', are vividly figured, teasing away at repeated phrases in ways that suggest affinities with minimalism; at times, as on 'Entrain II', a rarefied jazz feel emerges. Elsewhere the music is more abstract with an overt air of exploratory research into acoustic microcosms.
Pattern matters, but fundamentally 'Palimpsesto' engages with sounds in themselves - it's for listeners who are inquisitive along those lines rather than devotees of any particular genre.

Deriving from the Greek for ‘again’ and ‘to rub smooth’, a palimpsest is, traditionally, a parchment that has been rubbed clean and then reused, each re-writing leaving its own faint traces. The musicians featured on Palimpsesto have set out to achieve this through sound:

Is music but a palimpsest in the air? A moment to moment of writing and erasing different temporal layers? A coexistence of what we have accumulated, and how we relate, and respond to the instruments and to each other, in the course of a musical encounter? - Thanos Chrysakis

Tuned percussion forms the backbone of many tracks, but Palimpsesto varies from quietly melodic to intense and visceral. Tracks such as ‘Opiophobia’ play with rhythm and fixed pitches whereas the opening track ‘Terse Symmetry’ explores the piling up and then rubbing away of percussive timbres. It’s easy to imagine this disc as a slightly warped work of early minimalism, like a Philip Glass record that’s been left out in the elements for a few weeks; with ‘Checkmate’ the record has begun to curl a little at the edges, whereas with the grooves for ‘Fountains of Violet’ have picked up some grit and scratches.

‘Phosphoros’ draws in the listener through fragile, spindly melodic fragments occasionally interrupted by delicate noises. The sound of breathing betrays a human presence hidden in the background. The strange pulsations of ‘Sonoric Clay’ are like trying to free one’s feet from sonic mud, an incredibly physical gesture that would be even more striking performed live.

Palimpsesto blurs the boundary between ‘natural’ or live acoustic sound and processed electronic materials. This is achieved through the choice of instrumentation, which is heavily reliant on percussion, often played in an unconventional manner. The tracks are improvisations, seemingly leading to an occasional sparseness, and this combination of textures and timbres is in some ways reminiscent of early pioneers of electronic music. At its best this approach allows a fascinating exploration of sonorities, but at other times seems to lose its way. [AT note: you can't find your way, if you don't lose it at some point!]

For me, Palimpsesto is less a writing over and more of a rubbing away, slowly revealing something hidden. Sounds weave patterns and then fade, leaving only their reverberations - in the air and in the sounds that follow.

Thanos Chrysakis, Dario Bernal Villegas, and Oli Mayne claim the second release for the Aural Terrains label with “Palimpsesto”; a disc exploring deeply within prepared piano, vibraphone, drums, and electronics. As with Chrysakis’ “Klage” album, the recording quality is perfect – a real bonus for those who will enjoy reveling amongst the glassine structures with headphones.