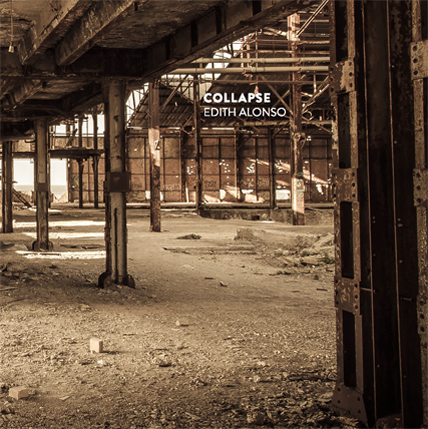 Edith Alonso was born in Madrid and began her classical studies playing piano but soon became interested in playing guitar and saxophone as well started to be interested in jazz and rock music. In the early 90's she played the electric bass in a well-known punk-rock band of the underground scene.

She moved to Paris where she studied electroacoustic and instrumental composition. She discovered musique concrete with composers such as François Bayle and Pierre Henry. He holds a PhD in Arts, Sciences and Technologies from the University Saint-Denis-Vincennes (Paris) and the University Complutense (Madrid).

She is very active in the field of improvisation while also collaborates with other media including film, dance and sound installations. She is co-founder of Campo de Interferencias, a non profit organization for promoting sound art in Spain and Co-director of Radical dB Festival, music & technology festival in Zaragoza (Spain). 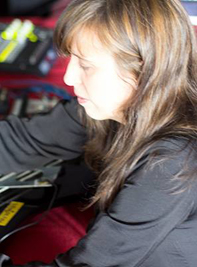 “Je suis perdue,” proclaims writing on a wall in one of George Zahariou’s photographs on the cover of Collapse. Nearby in the same image “madness” is scrawled above a boxed-in drawing of a receding spiral. Architectural dereliction and psychological turmoil coincide in the visual artwork, and Edith Alonso’s four-part composition for prepared electric bass mirrors that combination with sinister subterranean murmurs, spooky rumbling, ominous rustling and alien chatter. Recorded in Zaragoza in May 2014, Collapse has acoustic depth and expressive breadth far beyond the limits its basic instrumentation might suggest. Alonso starts with the bass guitar as a physical resource but her music has intensity and imaginative scope that transcend the well-worn cliches of dark ambience and low end atmospherics. Irreconcilable tensions spread through its stratified soundscapes; menacing faultlines open up as layers slide and clash. An engrossing study in physical and psychic disintegration.

An attentive analysis of Edith Alonso's CV gives several clues about the typology of creative energies fuelling Collapse. Having been an active practitioner/student both in punk bands and electroacoustic environments, this Spaniard attempted to transfer the disorderly drive of anarchy into a more structured context, prepared electric bass being the lone source. Over four tracks, the raw dynamism of a growling sonic coagulation maintains its clutch on our focus, in a way forcing a physical absorption of its constitutional substances. In the meantime, a multitude of micro-components adds various layers of vivid intricacy to the music.

The violent oscillation of thick strings is a generator of compelling vibrational irregularity. With Alonso setting in motion an arrhythmic interaction between manual skill and bottom-range resonance, the solitary listener becomes the innermost core of a magmatic compatibility. The sonorities are mostly aggressive and relentless, still allowing the detection of an intrinsic design: a low-frequency monarchy, with a few openings to the comprehension of what happens behind the scenes. The sense of organization is clearly discernible even in the presence of strong factors of intimidation, which is especially highlighted as the volume goes up.

As the title may suggest, the composition transits across states of relative intelligibility to gradually turn into a jarring ensemble of filthy throbs, raspy densities, echoing thuds and fighting partials. The spitefulness of a grubby harmony accepts no armistice; and yet, listening to this album with the whole body and all aerials up is mandatory to receive the access code to its underground chambers. The ultimate surprise: you're going to feel finely tuned at the end of the apparent chaos.

[EN]
Is in this worrying wind room (cd cover) that Edith Alonso placed one day her prepared bass? To, perhaps, submit it to burst when the annoying bow decide to abandon or to change it in insect hotel (according to the fashion of the day) singing?
Under the leadership of a contact microphone or the sheer force of her wrist, she collects anyway amazing grunts when they are not rather beautiful patterns that turn before disappearing in a hint. And if you are thinking from time to time in John Eckhardt, the comparison is not to put Edith Alonso at a disadvantage.

Spanish composer and sound artist Edith Alonso's career has encompassed many fields. She began playing classical music on the piano but soon grew interested in the guitar and saxophone and explored jazz and rock. In the early nineties she played the electric bass in a local punk-rock band. Later she studied electroacoustic and instrumental composition in Paris and discovered musique concrete with composers François Bayle and Pierre Henry. She composed music for many multidisciplinary formats - live poetry, audio-visual, dance and theater projects, improvised in a duo and trio outfits and composed music for "Docuficción en vivo" (documentary fiction - live) about the International Brigades in Aragon (during the Spanish Civil War).
Collapse is a four-part composition for prepared electric bass, recorded in May 2014, edited and mastered by Alonso a year later. Alonso transform the electric bass to an otherworldly sonic generator. She keeps producing from the prepared and mutated string instrument more and more bubbling layers of raw, industrial sounds until any conception of the electric bass spectrum completely collapses and drowns in this dense swamp. This demanding journey open with the aggressive “Collapse I”. “Collapse II” caress a distant pulse in its foray into alien-sounding terrains. “Collapse III” is more suggestive with its sinister, cinematic quality. The final “Collapse IV” mixes the distorted, processed metallic bass sound into an intense, fiery stew that threatens to erupt and melt anything on its course.
back to releases top