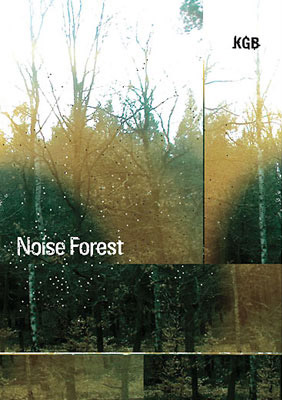 Noise Forest is the latest performance project by the KGB trio, following 2008`s release Smoke on Devil`s Mountain; a recording comprised of performances and field recordings made at an abandoned NSA station in Berlin.

The Noise Forest environment was created in Berlin during the weeks before the two day long performance. Involving found objects, metal constructions, machines, contact microphones and various traditional instruments. The Audience was invited to enter the environment from above through a ladder leading from Chef Manuel Czech`s kitchen.

Founded in 2004, KGB makes music using digital, electrical and acoustic instruments, creating music incorporating field recordings and processing, and performs as a trio and with an orchestra of improvising musicians. The Swiss Pharmaceuticals CD was released in 2005 on Utech records. Henneböhl and Dougherty have been working together in various Berlin experimental/noise outfits (Idiot Switch, Oktoschloks, Control, "Wendel Collective"), and perform with Cascone as KGB whenever Kim comes to Europe. The group has played venues across Europe including Instants Chavirez (Paris), FIM (Basel), Ausland (Berlin) and SKOP (Frankfurt). Kim Cascone studied electronic music at the Berklee College of Music and the New School in Manhattan. He founded Silent Records in 1985 and has released more than 30 albums of electronic music on Silent, Sub Rosa, Mille Plateaux and Raster-Noton. Cascone has performed with Merzbow, Keith Rowe, Scanner, John Tilbury, Tony Conrad, Pauline Oliveros and worked on two David Lynch films as Assistant Music Editor. Cascone founded the microsound list in 1999 and has written articles on post-digital aesthetics for Computer Music Journal and Contemporary Music Review. Guido Henneböhl builds and performs on his own analogue and electronic instruments. He has performed across Europe with artists such as Travis Just, Alwynne Pritchard and works in the groups Idiot Switch and the Oktoschlocks. Brendan Dougherty was born in Philadelphia and has been located in Berlin since 2002. He works as a composer and performer in the areas of improvised music, jazz, and collaborates often with Dance and Theater Productions. He has worked with the likes of Jeremy Wade, Billy Bang, Aleks Kolkowski, Jon Rose. 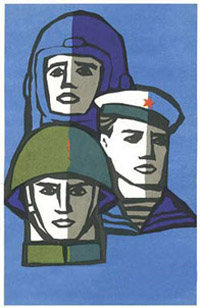 Behind the acronym KGB hide Kim Cascone, Guido Henneböhl and Brendan Dougherty, all well-known musicians and researchers in the contemporary digital-electroacoustic scenes. This combo - founded in 2004 - stands out for their use of field recordings and processed sounds in performances. In this recording, created at an abandoned station of the National Security Agency in Berlin, those obtained using "objets trouvé", metal constructions and contact microphones clearly stand out, along with the traditional instruments used. The audio environment, which lasted all of two days, is dedicated to the memory of David Tudor, himself a composer who was interested in flexible and complex sound imagery, with polyhedric combinations of several layers and inserts. Purposely - for the occasion - the trio abandon many of their usual standards, opting for a more open and improvisational score, supported by their audience's contributions, by manipulations made with MAX/MSP and a homemade set-up clearly inspired by circuit bending.

KGB are a trio of sonic artists. Using my special forces training I’ve worked out that Kim Cascone is K, Guido Henneböhl is G and Brendan Dougherty must be B. Their DVD release by Aural Terrains was recorded live at Die Remise, Berlin, an abandoned National Security Agency (NSA) station, on Nov 22/23 2008. KGB, Berlin, an abandoned spy installation, it all hangs together very well. To top it off, late November in Berlin must have been bloody cold.

The music is described as ‘involving found objects, metal constructions, machines, contact microphones and various traditional instruments’. This DVD is all about the music. The visual element is very straightforward: a series of five colour photographs, scenes from  an unnamed forest, probably near the musical space, for the duration of each of the tracks.

The music is presented on DVD so that the listener can enjoy a much higher resolution than that of the CD format. If you ever thought that the CD format, with its 16bit/44.1KHz resolution, was handed down to us as a result of intensive research and development, you’d be mistaken. On this recording you get the much more satisfactory 24 bit/96kHz. The difference between the two, if you have the equipment to play back the higher resolution, is palpable. I work all the time in 24 bit. Despite numerous experts, acousticians and other scientists telling me that it’s a waste of time, I can feel the difference not only with my ears but with the rest of my body.  In other words they can go back to their spectrographs. With Noise Forest Aural Terrains are to be warmly congratulated for attempting to overcome the limitations of a format which the corporations have given us through a combination of limited vision in the research phase and lack of enterprise in the development phase. Here’s some more background if you’re interested.

Before I come to the music, I’d like to say a few words about the concept. First there’s the notion of transforming a space, a cold war listening station or such like, into an energised and activated musical room. A simple reading of this transformation would tell of an exorcism, a movement from darkness to light, negative to positive, if you think NSA stations were ‘dark places’ and music is a ‘good thing’. A simple reading, but worth considering in its exploitation of the emotional, literary and cinematic resonances of the whole discourse around the cold war. Then there’s the transformation of the listening room (if I’m right in thinking that this was some kind of listening station) into a space where new listening habits and innovative approaches to listening culture are laid bare.

Two artists come to mind as having dealt with similar themes.  Louise K Wilson‘s ‘A Record of Fear’, consists of sound and video pieces investigating similar musical transformations carried out in an abandoned ‘top secret’ military installation at Orford Ness, Suffolk. For some time now I’ve been following closely the excellent work of Estonian based artist John Grzinich, who, with various artist colleagues, has carried out similar investigations, including a project at the former listening station of Teufelsberg in Berlin. I’ve been privileged to have worked with more than one group of fine arts curators who seek out old, unusual and abandoned spaces for similar transformation.

This kind of work, which I happen to think holds great promise for the future of sound art, with its true interdisciplinary potential, would hold that the process of documentation is as important as an end product. In fact you could argue that the documentation is the work and vice versa. With Noise Forest I appreciate that an independent niche label such as Aural Terrains runs on limited finances, but in an ideal world I would have greatly appreciated a comprehensive documentation the performance: the physical, logistical and musical preparations, the construction and sourcing of instruments, the performance itself, the audiences responses and so on.

Now to the sounds. Each of the five tracks are similar in many ways, though non the less enjoyable for that. Everything is very consciously musical, with a tangible sense of deliberation. Some of the features that stand out: spectral variety in abundance, a fine balance of textures and gestures, a sense of communication between the players, dynamic shape in the emerging forms, variety in the blend of iterative, tonal and dronal passages, elaborate counterpoint and rich polyphony, at times of symphonic proportions. Folk instruments appear as if undergoing some sort of archive recording and there are passages of room noise and of people talking and moving around in the space.

The music is dominated by metal in motion. In fact there’s a metal consultant named on the DVD, Katrin Heidorn. I should declare my particular fondness for metal – the feel of it, its uses in general and specifically in music, the Chinese medicinal concepts.  Secondly, I like the feel of large scale improvisation involving numerous percussion instruments in rich acoustic spaces. Regardless of how improvised the music was (I’d guess a fair measure of improvisation alongside some pre-arrangement), it sounds improvised and it was this quality that drew me into the work from the beginning.

Not all of the sounds worked for me, but this is a minor niggle and of course a personal preference; others will disagree. The more obviously processed sounds broke a spell somewhere along the way, taking me a way from the mental picture of an enormous Tinguely-esque machine, which, to elaborate on the effect, was affirmative, expansive, optimistic, rich, uplifting and sincere in equal measure. Having said all that I can imagine some listeners of a more sombre make-up conjuring images of the Viking smithVölundr forging battle swords in his underground cave.

The sense of space is vital to the work and becomes evident very early on. Its reverberant qualities, dimensions, the material structure can all be reconstructed in the mind’s ear and eye. Above all, one has a rich sense of the players interacting with the unique acoustic qualities of the chamber.

This work presents a refreshing reconfiguration of the notion of music in performance and again Aural Terrains should be congratulated for running with and developing the concept, a concept which has be thinned down to extremes to great effect. For example I enjoy the even more radical notion of simply being told of such performances, gone forever (respecting of course the first law of thermodynamics), except perhaps for a trace in the ether, or, for posterity, a mark on the page.

I wish more people would do this sort of thing.