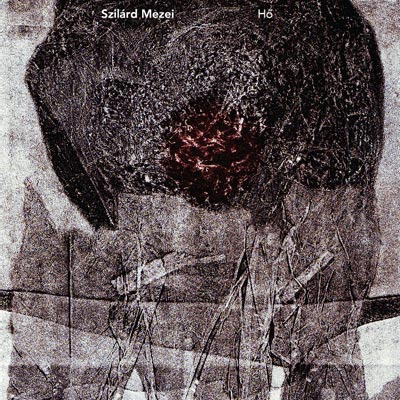 Born 1974 in Senta, Serbia (then Yugoslavia) as a member of the Hungarian minority in the multiethnic region of Vojvodina. Completed his violin studies in Senta and Subotica and studied composition for four years at the University of Arts in Beograd under prof. Zoran Eric. His orchestra plays contemporary improvised music, mostly performing his own compositions. As a composer, Mezei is interested in exploring the relationship between improvisation and composition (similarly to Witold Lutoslawski's aleatoric and Anthony Braxton's creative music methods), incorporating elements of jazz and authentic folk music as well. As a young musician he followed the path of B.Bartók and Gy.Szabados. Mezei is also very actively involved in composing scenic music (among others with Josef Nadj). He has released CDs with labels like Leo Records, Not Two, Creative Sources, Red Toucan. Played so far with musicians/improvisors like Matthias Schubert, Tamás Geröly, Róbert Benkő, György Szabados, Tim Hodgkinson, Albert Márkos, Peter Ole Jörgensen, Jens Balder, Joe Fonda, Michael Jefry Stevens, Joelle Leandre, Hamid Drake, Herb Robertson, Frank Gratkowski, Charles Gayle. His writings on music have been published in many journals and magazines in Former-Yugoslavia and Hungary. 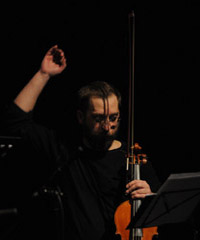 That Mezei is a huge musician, endowed with both explorative inquisitiveness and respect for the tradition, is out of any discussion. That the average listener will be able to identify with and digest all the acoustic events occurring in the 70 minutes of this CD for solo viola and double bass, I’m not so confident. Bad for those who cannot keep the concentration on, because Hő is replete with high quality music, principally revolving around the concept of timbral itemization and consequent formation of improvisational substance from the raw components (which do not sound unrefined at all, for it takes decades of technical grounding to extract shards of upper partials and hints to discordantly edgy melodies like that). Hundreds of infinitesimal processes fused into a comprehensive display of instrumental prowess.

I’ve reviewed several releases by Aural Terrains recently. If you’re wondering why I’m so positive about all of them, it’s because I’ve enjoyed listening to all of them and because, as far as my modest critical faculties allow, I’ve found them all to be of musical interest, to offer something new and to have some depth about them. I’m also drawn to the fact that all the releases have evidently been selected (or solicited)  because of an original underlying conceptual approach.

Szilárd Mezei’s Hő [69:52] is true to Aural Terrain’s aesthetic. The first  ’side’, Hő (heat), for viola,  has three tracks. The second shorter side, Hó (snow), offers three tracks for double bass. There’s a final piece, track 7,  Króm (Chrom), for viola, though I’m not sharp enough to ‘read’ the programme here. Chrom as related to colour would seem to be a probability.

The album consists of a printed CD and a card inner. Further details are given on Aural Terrain’s website where we are told that Mezei is of Hungarian origin living in Serbia. I’ve always found similarities in the folk musics of these regions and I could draw connections over many musical parameters, for example dance forms with odd metrics, a certain gestural flair. In addition I have my own personal connection with elements of these folk traditions as they caught on in the Irish tradition in the ’70s and later in the Scottish tradition, even unto the dour bastions of Highland piping. Furthermore I’ve always felt that something binds together certain strands of the fiddle/violin classical/ folk musics of the Balkans across to Romania and Hungary. I can’t think of Hungary and folk music without thinking of the peregrinations and research of Béla Bartók , Ligeti’s 2nd string quartet, an open approach to scordatura and rhythmic invention, respect for the spontaneity of extended techniques before they become fixed in notation.

On the topic of notation and composition, we are told in the online notes that the pieces are compositions, but I suspect we’re talking here about a method or methods of notating possibilities, directions, shapes and arcs. It would be very scary indeed to contemplate the possibility that the whole of track 1 is conventionally notated.

And so, to my ears, Mezei’s viola work seems to dig out a rich vein from these traditions, to temper it with a fine conservatory technique and to forge new models of creativity and expression.

The piece that stands out on this album is Track 1. This is such a powerful statement of what the viola can offer. My experience of the viola is sketchy though I’m deeply impressed by the fact that one of my best friends at school stuck religiously to his viola despite the powerful and popular trend at the time which encouraged everyone to take up guitar, bass or drums. He’s now one of the world’s foremost soloists. I also know that it’s no longer funny to regard the viola as the ugly cousin of the violin.

Track 1 is a forceful mixture of percussive statements, muted scalar runs, pizzicato slaps and pops, the soundtrack to an animation in which a family of mice attack the strings and fingerboard. More seriously, the manner in which certain gestures pop out of the mix signals a robust conservatory technique. But over and above the world of technique I was thrown into a highly charged sensual musical universe. If you’ve ever had the privilege of sitting in a session cheek-by-jowl with a first rate fiddle player cutting his or her way through a Strathspey, you’ll know what I mean. The essential force of the upbow sends showers of roisin into the air like an explosive pollination, felt as a dust shower as it lands on your skin, smelt like the residue of a gunshot as it fills your nostrils, and eventually imbibed and tasted as it settles on the froth of your Guiness. Add this to the sight and sound of the player and the music and you are enjoying a truly multi-sensory experience. All of which puts representational attempts of such experiences, by media art or certain forms of audio visual installation, back into the shade.

And this is what I take away from Mezei’s playing on the first track –  relentless physicality and sensuality. We are reminded that music has its origins in simple materials, wood and string, and in the human body.